We are past the window for thinning apples and pear trees for 2017.  In northern Utah there is still time to thin peaches.  Cherries, plums, and apricots are generally not thinned.  Fruit set on fruit trees in Utah is spotty.  Some trees have good crops while others have light crops as a result of spring frosts and poor weather (cloudy, windy, wet) during flowering.  This weather kept honeybees in the hives and reduced pollination. Fruit trees are thinned for several reasons.

Before thinning you’ll want to assess fruit load and fruit set.  Using a sharp knife, cut through several fruit and count the number of seeds that are developing per fruit.  Apples and pears with at least 5 seeds are more likely to be retained than fruit with fewer seeds.  Peaches should have one developing seed.  Fruit that begin to develop without or with few seeds are more likely to drop before maturity.  In general, fruit should be thinned as early as fruit set can be ascertained after flowering. If trees are not thinned by 30 days after petal fall most of the benefits of thinning are lost (or at least reduced).

Apples and pears should be thinned to leave only one fruit per flower cluster and clusters should be no closer than 6 inches apart.  In apples the center fruit (king fruit) will be the largest and should be retained.  Remove the side fruit.  In pears the lowest fruit will be the largest and other fruitlets should be removed.  Small scissors can help to remove individual fruit.  Peaches should be thinned so that individual fruit are no closer than 6 inches apart.  Peaches are normally thinned by hand by twisting fruit to be removed.  Leave no more that 100 to 150 peaches on mature trees.  Young trees will have proportionally fewer fruit. 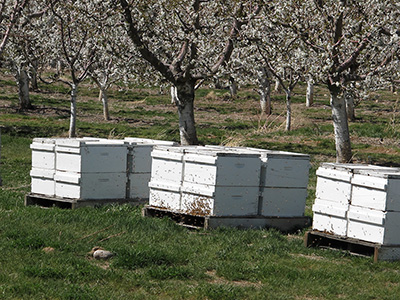 We’ve had some questions as to the status of honey bees and other pollinators in Utah.  It does appear that there was mortality this winter, primarily due to the buildup of varroa mites in hives.  But in general, the losses were not any greater than in past years.  Bee inspectors and specialists from the Utah Department of Agriculture provided the following information:

For more information on varroa mites and bees: