If you have seen sunburn damage on your peppers, tomatoes, and eggplant this year, perhaps it is time to consider management options for this year’s harvest and next year’s crop.

Sunburn damage can also occur in other vegetable crops including melon, squash, cucumber, bean, pea, and sweet corn. See the table below from the USU Fact Sheet on Using Shade for Fruit and Vegetable Production. 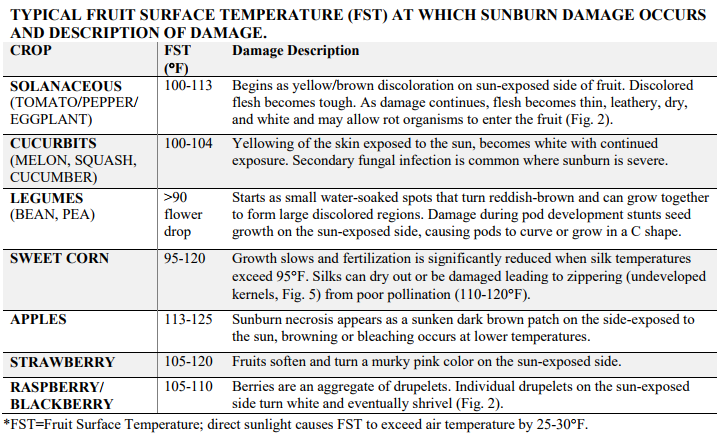 For Next Year’s Crop:

Powdery mildew and squash bugs aren’t the only squash issues we have seen this season. Watermelon mosaic virus, Alternaria leaf blight, and verticillium wilt have also been observed.

WMV is a potyvirus that affects summer and winter squash, zucchini, gourds, and pumpkins. The virus is spread by aphids which acquire the virus from infected weeds or alfalfa. WMV overwinters in infected perennial weeds or alfalfa.

Symptoms usually begin to show in June. First symptoms are often seen on field edges and aphids continue to move the virus across the cucurbit field.

Management options are very limited, and include;

There are resistant summer squash and zucchini varieties, but there are no resistant winter squash or pumpkin varieties. Insecticides for aphids are of limited value to control the disease.

Alternaria leaf blight is caused by the fungus Alernaria cucumerina and is most problematic on melon but can also occur on cucumber, pumpkin, and squash. This fungus is spread long distance on wind currents and in the field by splashing water. It overwinters primarily in infected plant debris.

Verticillium wilt is caused by the fungus Verticillium dahliae which affects several vegetable hosts including tomato, eggplant, pepper, okra, potato, artichoke, cucurbits (melons, squash, cucumber, etc.), spinach, and lettuce. V. dahliae is a soilborne fungus that infects host crop roots and invades their water-conducting tissues. It can survive in the soil for many years. This season, it has been found in squash, watermelon, eggplant, and okra.

Prevention is important as the fungus is very difficult to eradicate once it has been introduced into a field and can survive in soils without a host. Once the fungus is present, management practices should focus on reducing the amount of initial inoculum since curative measures do not exist.

Other causes of wilting in squash plants:

The hot, dry, and dusty conditions of this season have caused localized outbreaks of spider mites in various vegetable crops. Spider mite outbreaks can also occur after insecticide sprays have been applied that kill their natural predators.

Without a hand lens or microscope, spider mites look like tiny moving specks of dirt or light colored spots. They cause damage to host plants by sucking cell contents from leaves. A small number of mites isn’t reason for concern, but very high populations can damage plants.

Sap beetles have been observed infesting corn this season. They are typically secondary pests of corn but can act as primary pests if populations are high. Damage from other pests, such as the corn earworm, can provide entry sites for sap beetles. Sap beetles may also infest tomatoes, raspberries, strawberries, and muskmelons, especially if these fruits are wounded or overripe.

In corn, adult sap beetles feed on corn silk, pollen, and tassels. The larvae attack and feed on intact kernels and may hollow out kernels of the upper half of the ear. Super sweet corn varieties are particularly susceptible to sap beetle damage because of the poor tip coverage by corn husks and the higher concentration of sugar in the developing kernels.

Control with insecticides is difficult because adults and larvae are protected inside the ear and damage occurs close to harvest. If an application is necessary, products with a short pre-harvest interval should be used.

CEW moths typically lay eggs singly on fresh, green corn silks. Newly hatched larvae crawl down the corn silk and into the ear tip where they chew into developing kernels, but larvae will also chew on silks and leaves.

Master Gardeners have long been a front line of defense in identifying and reporting invasive garden pests. This training will hone your skills on invasive insect identification along with research-based control measures. Our top-notch instructors include scientists from USU Extension, the USDA, the Utah Department of Agriculture and Food (UDAF), and Whitney Cranshaw, Entomologist (Colorado State University) and author of Garden Insects of North America. Seats are limited so register early.

Stroll through the beautiful demonstration gardens and learn from our specialists about the latest and greatest landscape and garden-related topics. A few lucky gardeners will walk away with a set of Sego Supreme (water-wise) plants that have been bred and introduced by the Utah State University Botanical Center or maybe even a bit of freshly harvested honey…