View a pdf of the spray timing table. Be sure to read the instructions at the top of the page, for how to read the table.

Second generation egg hatch has begun or will soon begin for most areas of northern Utah and is underway in southern Utah. As we noted with the first generation of codling moth, be mindful of the date range for the “period of greatest egg hatch” on the table (between 1380 and 1780 degree days). Make sure that the insecticide you are using for control has fresh (rather than waning) residue on the fruit during this time period.

Earlier this week, we inspected fruits from a variety of orchards and found an average amount of injury to fruits, ranging from 0.5% injury up to 6%. As noted in last week’s advisory, it is important to evaluate your own crop for damage to see if your management program is working. Most first generation larvae enter through the calyx end because it is easier for them to enter the firm fruit at that location (and that is where the frass will be seen). Although not as common, side entries can also be found now, usually where two fruits touch or where leaves touch the fruit.

If you see damage, slice the fruit open to see if a larva is still present. If larvae are large or are not present, then the damage occurred approximately 6 to 7 weeks ago (at the beginning of egg-hatch). Medium-sized larvae (1/3 to 2/3-inch long) indicates that entry occurred at the early to mid-egg-hatch period, and if the larvae are small, they entered in the last 2 weeks.

Woolly apple aphid populations in Utah County increased rapidly in the last week due to the hot weather.  Spraying to drip may be necessary to fully penetrate the waxy, woolly colonies.  See last week’s advisory for treatment information.

White apple leafhoppers from the first generation are winding down, and adults have laid their eggs. This insect feeds with sucking mouthparts from the undersides of leaves, causing damage to the foliage that resembles spider mite damage. Trees can tolerate a high level of damage, but the main issue is the nuisance of the leafhoppers flying about during harvest.

If you find some foliar damage now, plan to inspect the leaves for nymphs starting in late July to mid-August. If the nymphs are not treated, leafhopper adults can be numerous by late August.

If you have been battling the insect, San Jose scale, note that there will be a second emergence of crawlers in mid-August in northern Utah.

This pest is usually treated primarily with a dormant oil spray and with an insecticide application of the first crawler emergence. But for heavy infestations, or where you missed the window for the first emergence, consider a treatment at the timing below.

One spray is all that is necessary. For residential application, use Ortho Fruit, Flower and Veg, Triazicide, or insecticidal soap, mixed 1% horticultural oil (apply in evening or early morning to avoid hot temps). For commercial application, mix 1% oil with Esteem, Sivanto Prime, or Centaur.

Feeding damage and honeydew production caused by pear psylla is evident now. These tiny insects are active from spring to fall, and if left unchecked, can build to damaging levels. At this point in the growing season, adults, eggs, newly-hatched nymphs and old nymphs can be found.

The toxins in their saliva cause death to the foliage feeding sites, reducing overall photosynthesis and tree vigor. Psylla can also spread a phytoplasma that causes the disease, pear decline. European varieties are more sensitive than Asian varieties.

The best time for treatment is in spring (targeting adults and eggs). If damage and honeydew is apparent, a summer treatment should be used.

Earwigs are active in fruit trees now, but while fruits are still hard, they are instead feeding on leaves or other insects. Once fruit softens, earwigs chew small but deep pits into the fruit flesh. They can also enter fruits through existing openings or cracks. Their feeding introduces bacteria and decay fungi that can render the fruit inedible.

The wet spring weather likely has contributed to the high population, which will remain high into peach harvest. They are active at night, but beat-samples or close examinations of fruit (especially split-pits) will determine if earwigs are present.

To manage earwigs, use a variety of options:

Lygus bugs (tarnished plant bug) are an issue where neighboring fields dry down or where orchards are near alfalfa. After alfalfa is cut, the bugs may move to peaches.

Growers with a history of cat-facing injury to peaches should monitor fruits for signs of new feeding. You will see small water-soaked lesions that will ooze clear gum. Fruits that have distorted growth (cat-facing injury), or healed corky bumps, were damaged during early fruit development, so do not count that in your current injury assessment.

Often, cover sprays for peach twig borer will help to control lygus, but if you see more than 2% of your fruit with current injuries, a control may be warranted. The most effective options are pyrethroids (Assail, Warrior, Mustang Maxx), including the organic pyrethrum. Border treatments should suppress hot-spots.

View a pdf of the spray timing table. Be sure to read the instructions at the top of the page, for how to read the table. (Note: some dates are in italics because they are past dates.)

Most northern Utah locations are in between generations. For the second generation (third generation in southern Utah) which will begin in late July, your treatment plan will depend on last year’s damage. With low damage, you can apply one spray (or none if early season treatment was applied). But keep in mind that the warmer temperatures we have been experiencing will speed up egg hatch and larval development, and if you are harvesting peaches late into August and/or early September, you may need to apply a second application to protect the ripening fruit.

The option you are using for codling moth and/or cherry fruit fly can also be used for peach twig borer.

The western grape leafhopper, which is building in numbers now, only feeds on leaves; it does not affect fruit. They damage the plant by extracting sap and chlorophyll, leaving behind white stippled areas. Usually feeding is clustered along veins. As populations increase, foliage may become speckled with dark excrement. But more importantly, they are a nuisance as you work in your grapevines.

The leafhoppers overwinter as adults on weeds or groundcover near grape plants, and lay eggs on foliage in spring. At this time of year, the second generation nymphs are active. Plants can withstand an average of 20 nymphs per leaf.

When leafhopper populations are higher, leaves can turn yellow and drop prematurely. As a result, fruit can become sunburned, resulting in delayed ripening. In addition, small black drops of excrement will mar the appearance of table grapes.

We often see blackberry and raspberry fruit with white or tan drupelets, or with shriveled druplets on the berry. Two common reasons for this are sunscald or insects.

If the discolored druplets are still firm, the damage is sunscald, occurring only on the exposed side. The fruits are still edible, but not as marketable. 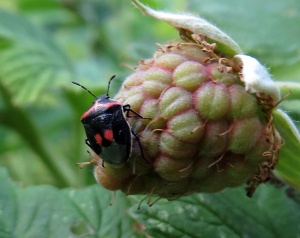 If the druplets are shriveled, then the cause is a chewing or sucking insect.

To determine the insect cause, it often requires investigation, both during the day and at night, for insects on the berries.

With ripe fruit, the only insecticide option that would target all of the above-mentioned pests is pyrethrin. It is organic and has a 0-day PHI.

Commercial options include Azera, Botanigard, Pyganic, Tersus, and there are many residential products with this ingredient.